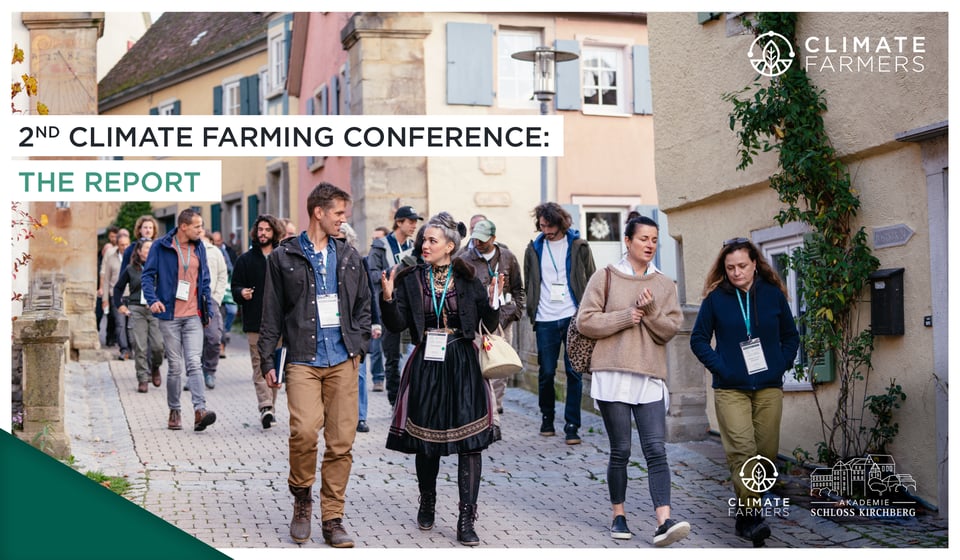 We kicked off the 2nd Climate Farming Conference at the farmer’s castle in Schloss Kirchberg an der Jagst, on October 25th with a lot of excitement and curiosity in the room.

150 hand-selected experts from 18 European countries travelled to Southern Germany to participate in a 3-day gathering focused on putting farmers back where they belong in the agrifood system – its centre.

We welcomed 75 farmers and 75 organisations from the European ecosystem of regeneration, of which 45% were female and 55% male.

“It’s easy to recognise that there are really great people here.”

A participant described the atmosphere in the castle as “coming home”.

Farmers are dealing with the dire consequences of our climate and political crises head-on.

Global competition and agricultural policy prioritise production above all else. Failure to succeed is pushing growers out of the market. The damage? Dramatic. Europe has lost four million farms in 10 years. In France, farmers commit suicide on a daily basis, setting a tragic European record.

The impacts of climate change on agriculture, like increasing temperatures, floods, storms and highly varying rainfall, affect crop yields. Volatile supply chains and extreme price fluctuations are leading to food insecurity across the globe — a clear-cut road leading the world to catastrophe.

There is a pressing need to enable an agricultural system that benefits farmers, climate and society as a whole—one that is ecologically, economically and socially resilient: the system we need is regenerative agriculture.

The European agrifood system, however, disregards the voices of farmers. It’s a system in which policy and industry initiatives don’t consider farmer needs or land stewardship wisdom. Legislators and corporations take critical decisions without taking farmers' needs into account. The result? Lawmaking and subsidy systems with perverse incentives - a point repeatedly stressed and slandered by the participating farmers.

“If you don’t have a seat at the table, you’re probably on the menu.”

We asked ourselves what needs to take effect from the farmer's perspective.

The participants collaboratively formulated a shared vision for the European agrifood system, building upon the European Regenerative Agriculture Manifesto signed by 70 experts during the 1st Climate Farming Conference in 2021.

While exploring the outdoors, participants split into groups to unfold our shared vision using the six-lens framework: 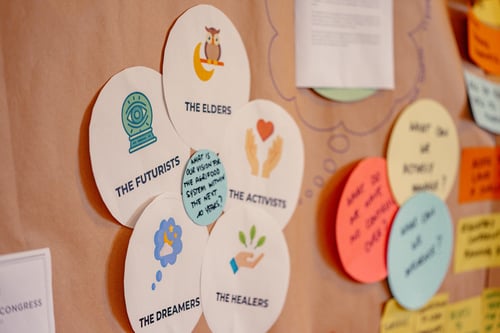 Taking into account the various perspectives, the participants collectively agreed upon a draft shared vision:

“We envision an agrifood system centred on reverence for life. Life is understood
as health for all beings on personal, communal and ecosystem levels; for humans,
animals, plants, soils and ecosystems alike. Life is present today and for generations
to come.

Understanding natural dynamics and their stewardship is deeply embedded
in our society, from early childhood education to how every member of society
relates to our health and nature. We, therefore, understand the imperative of
diverse voices, from ancestors to women and indigenous groups to representatives
of future generations. We allow inclusive dialogues to heal us.

Food production includes all phases of ecosystem succession in a context-
appropriate way. We treasure diversity as a central element without the need for a
“regenerative” label. Creating dependence, fragility and exploiting vital resources of
the future is recognised as the absurdity it is, rather than the norm. Access to land
is not a question of wealth but proven stewardship for the benefit of the whole.

The agrifood web comprises mutually beneficial relationships and distributes
benefits, risks and information among all stakeholders. Food communities are
as localised as possible to enhance empathy and connection. Healthy food is
accessible to all.

Farmers, as stewards of key processes that sustain healthy societies, receive the
recognition they deserve as food producers and as role models for how we as a
society interact with our ecosystems. It’s a sought-after profession for children.”

“There is so much hope in the castle right now, wow!”

As defined and voted upon by the participants, the following represent the most elemental regenerative agriculture implementation issues.

After opening up Pandora’s box as we explored the many challenges facing farmers, each participant had burning questions they wanted to address. As a result, we established a space to dive deep into these discussions.

Whether it was supporting farmers in transition to regenerative management, building consumer awareness or making the carbon market inclusive, we had time to go beyond the philosophical and instead brainstorm the practical. 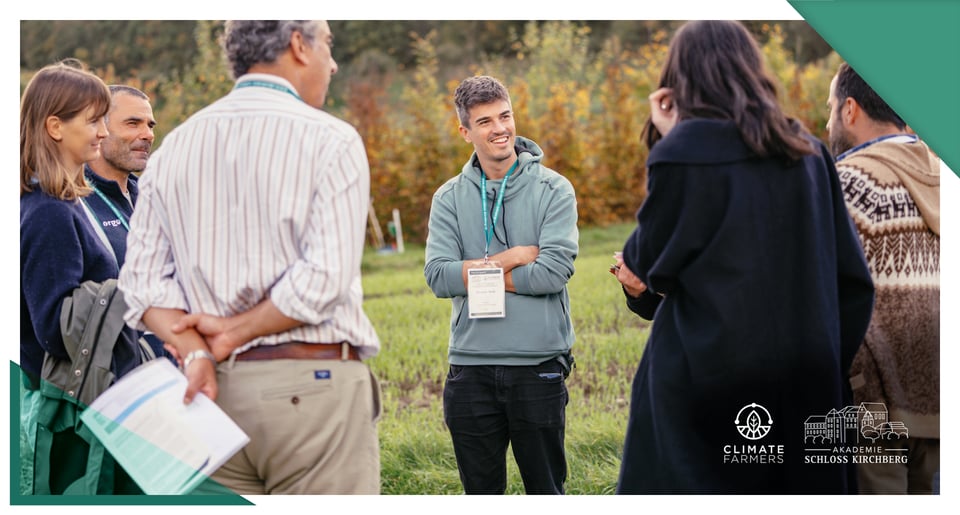 THE LAST PIECE OF THE PUZZLE: ACTION

To ignite change in the European agri-food system, we need to harness the power of these fruitful conversations and turn it into concrete action. And that’s exactly what we did.

In-depth discussions culminated in 15 working groups for a regenerative future. The groups were pioneered by participants, covering a diverse range of progressive initiatives that will have monumental impact decades from now.

In many ways, these working groups are the cornerstone of this conference. Words can’t even begin to describe the immense eagerness to take action. Participants are willing to go above and beyond. And that’s why these groups are bound to catalyse systemic change in the European agri-food system.

The 15 working groups for regenerative agriculture 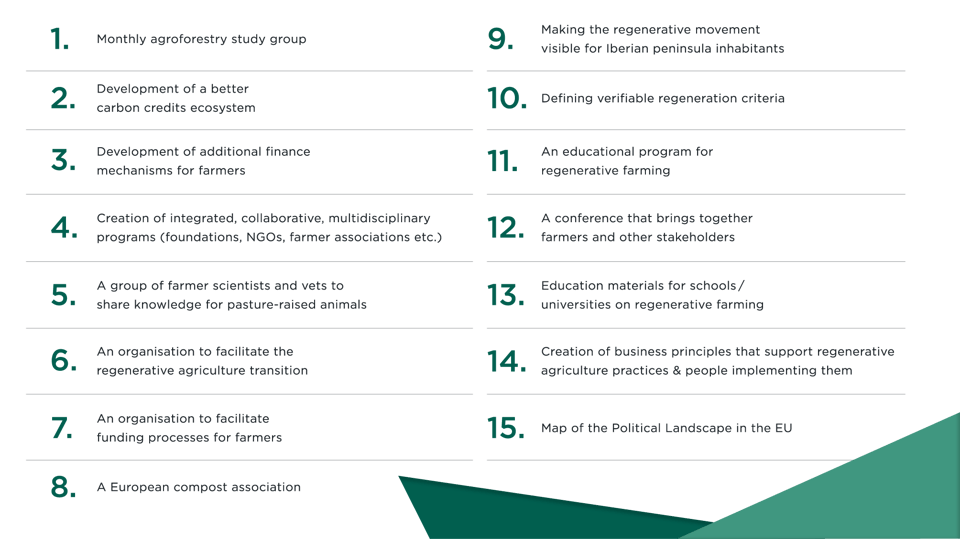 This conference has acted like a plot of soil. A tree has sprouted on the land, and each of these working groups is representative of its branches.

Although the branches are diverging in their own direction, they remain deeply connected through the roots of the tree.

These roots are the pillar of their existence - they provide the foundation and support needed to survive. The only thing that can fully embody the strength of these roots is our collective ambition as a regenerative movement.

To close the conference, we had a final exchange of offers, services, commitments and conversations.

We held a closing ceremony centred around key learnings of participants and next steps towards action. Below, you can find an overview of the commitments made by participants that will take these immense conversations further. 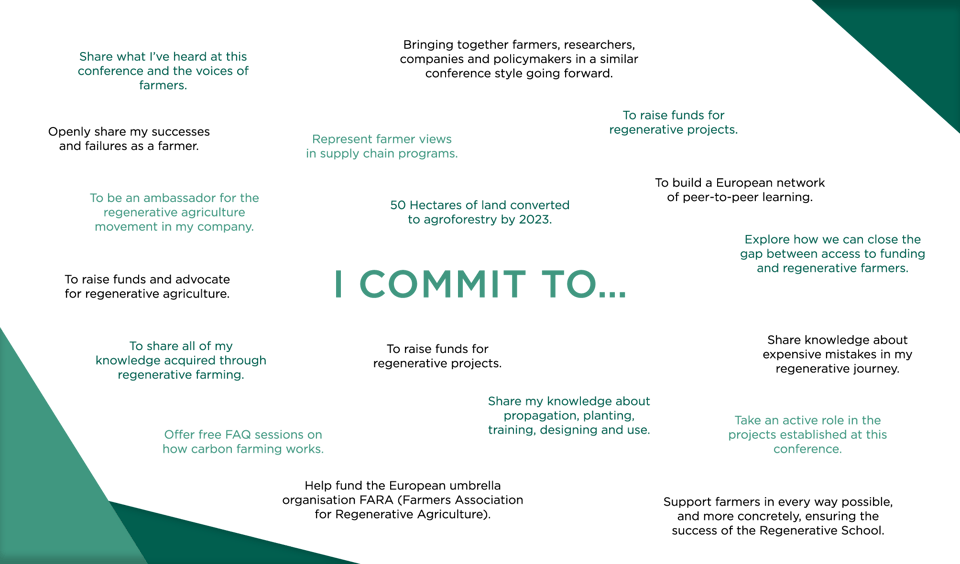 Whether it was a widespread feeling of inspiration, a realisation that the regenerative movement is characterised by some of the most driven people in Europe, or that a growing ecosystem of businesses and actors are willing to support farmers' transition, the learnings of this conference are too large to summarise in a single document.

We need to harness the power of this heartfelt gathering and use it as fuel to move full steam ahead.

“As a farmer, I have many moments of deep frustration towards the current state of affairs in the agricultural industry, but I’m leaving this conference with a light-heartedness that I haven’t felt in years." 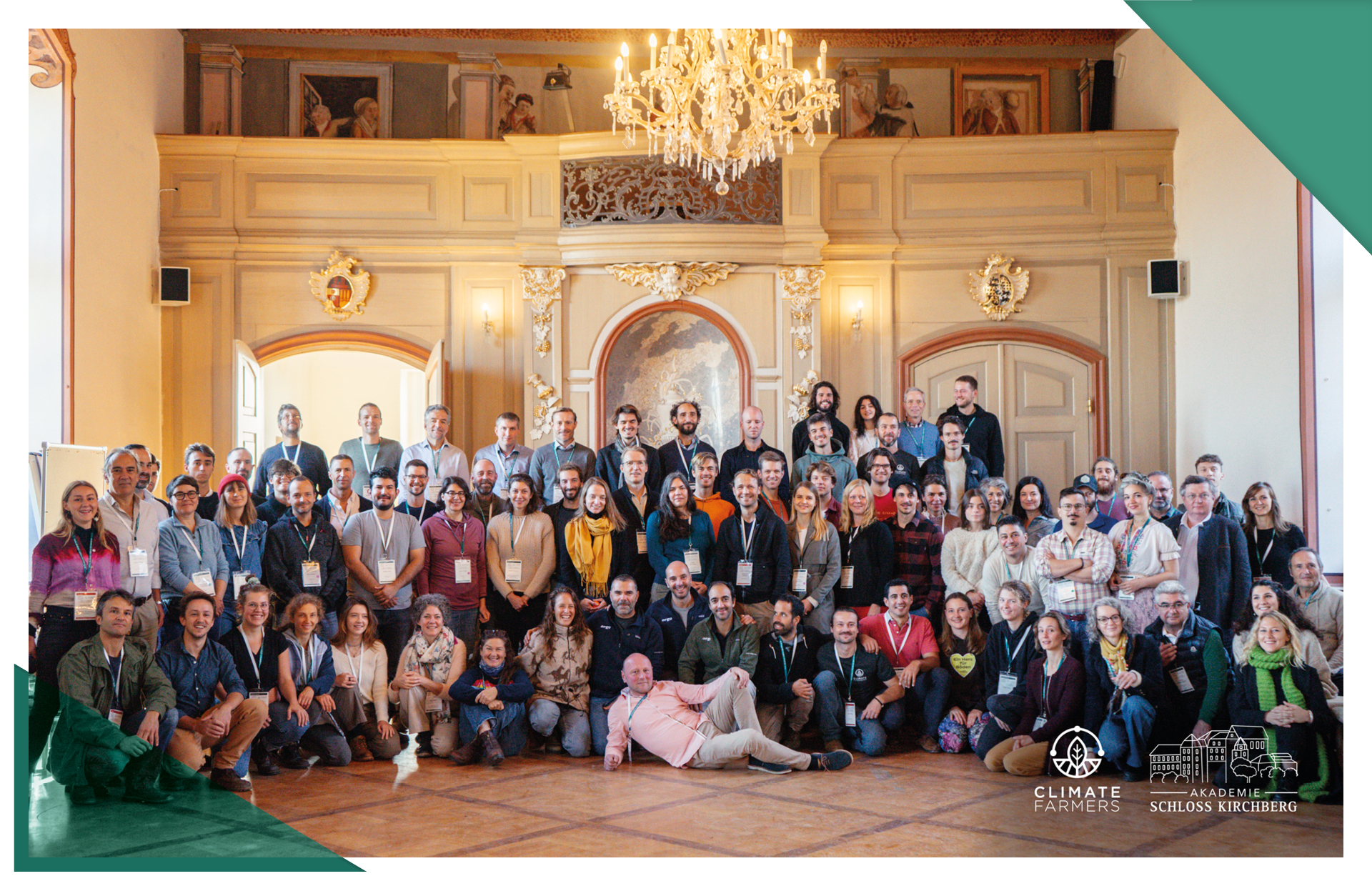 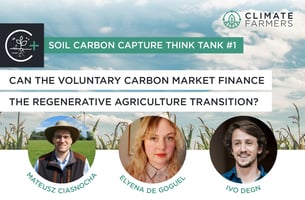 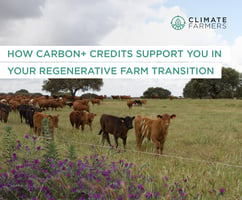 How Carbon+ Credits Support You in Your Regenerative Farm Transition

Every day farmers meaningfully contribute to society. Whether it’s producing the food we eat,... 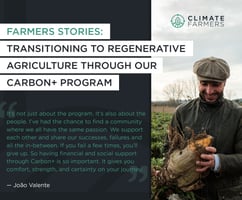